Description:
Air Hockey Online is here for all to play online with frictionless surfaces in video format and simulation. The game was first played and invented between 1962 to 1972. Brunswick Billiards employees first started this game, and it instantly became a hit in the worldwide sport.

The purpose was to create a hockey-based game on the surface which is frictionless and lets the puck flow without any effort on the surface. So the air table is topped with holes that support the frictionless flow of pucks. Now you can enjoy the same game online for free on your browser and computer.

Instructions:
How to play with challenges in Air hockey?

Playing Air Hockey Online is not as difficult as it is to play in reality because you have to hit the puck with a striker called Goalies, to make the puck reach the end of the opponent's goal. The frictionless table hence supports the hit, and so it becomes difficult for both parties to defend.

Join now and enjoy this iconic gameplay on the web with fully customized and optimized variables. Simple controls with the arrow keys and WASD, mouse for direction, and attack to make the puck reach its deadly opponent's goal. 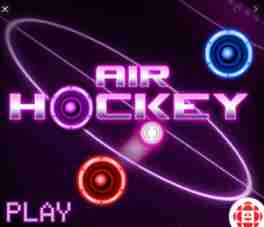